Currently, there are approximately 15 motorcycle first responders in Slovenia, who devote their lives to emergency medical care on motorcycles. As a result, the response to a medical emergency can begin several critical seconds before the arrival of an ambulance, thanks to their expertise, personality traits and management of the dynamic but safe ride. Interventions are carried out with seven motorcycles in Ljubljana, Maribor and Koper.

Most often, they are the first to arrive to an injured person, be it severe bleeding, a car accident, a heart failure or a stroke. On their way to the scene of the accident, they often risk their own lives. They are active on the roads between 1 May and 1 November. During this period, the team in Ljubljana alone intervenes about 600 times.

Learning from each intervention

Education and training are not enough to become a motorcycle first responder, as a special process is needed. In addition to having an adequate education, particularly motorcycle riding and emergency medical care experiences, including life experiences, play the key role.

“In every intervention something happens from what you can learn and which will be useful in the future,” says Domen Vodopivec, a long-time motorcycle first responder from the UKC Ljubljana Ambulance Station, who celebrated 15 years of service in 2018. “It is important to constantly work on your personal growth and development, to respond properly and to adapt to the situation at hand. Anticipation is a motorcyclist’s most important skill,” he added.

A passenger on the motorcycle: medical equipment 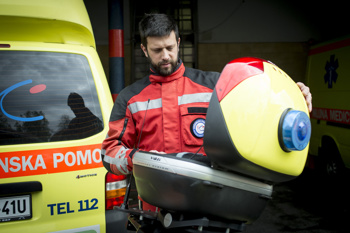 There are three bags full of life-saving equipment on the first responder’s motorcycle. Their total weight of 60–80 kilograms is equal to the weight of an adult.

The protective equipment of first responders is also very important because every time they are saving the life of another person they put their own life at risk. They wear protective clothing, including gloves, special boots and helmets, which are mandatory. “I remove protective gloves up to thirty times a day, which is why they wear very fast. If boots last two seasons, that’s very good,” says Domen Vodopivec.

Motorcycle first responders’ tips for those preparing for the motorcycle season: