Responsibility to the community

The Triglav Group is closely involved in the environment in which it operates and fulfils its corporate social responsibility through various prevention activities, voluntary work of employees and partnerships with the local community.

In cooperation with local communities, several projects and actions were carried out: Within the framework of the Children of Triglav project, carried out for the fourth year, multi-purpose playground equipment was installed to the joy of the children in the Municipality of Hrastnik. Moreover, 15 playgrounds were renovated in the Municipality of Piran. Two corporate social responsibility projects – Children of Triglav and Let’s Clean Our Mountains – were connected, in the context of which a new children's playground was built beside the Dom v Tamarju mountain hut. In addition, since the start of the campaign 15 other playgrounds from Kobarid to Slovenska Bistrica were renovated.

In 2015, a total of EUR 3.1 million or 24% more than in the previous year was allocated to prevention activities of the Triglav Group and EUR 1.4 million or 7% more to those of Zavarovalnica Triglav. Most funds were spent on improving road safety, reducing the risks of fire and measures for greater protection from adverse effects of climate change. For the second consecutive year, a portion of funds allocated for corporate gifts was used for preventive actions across Slovenia. 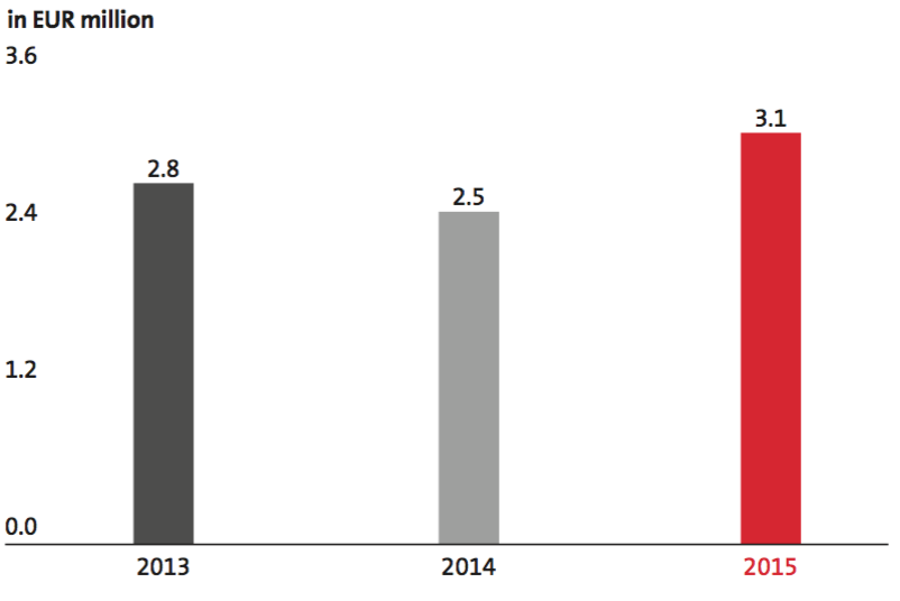 The good practice of public invitations to tender for distributing sponsorships and donations continued. As many as 2,132 applications were received for three tenders published on www.triglav.eu, of which 33.8% were approved.

The Company adhered to the revised Sponsorship and Donation Strategy and assessment of applications using the upgraded system, which allows more optimal selection and effectiveness of sponsorships in accordance with the predefined criteria. The commissions considering the applications ensure that the partnerships are compliant with Zavarovalnica Triglav’s brand identity and values.

The Triglav Group allocated EUR 3.2 million for sponsorships or 9% more than in 2014. The largest portion of the funds was spent on sports and recreation projects, followed by partnerships in culture, education, nature protection and health care.

EUR 311 thousand or 33% less than the year before was used for donations. Humanitarian projects received most funds. This amount includes the donation made to the "Everything Will Be Alright” Institute for corporate social responsibility projects. The activities of the Institute are discussed in greater detail below.

Amounts for sponsorships and donations of Zavarovalnica Triglav in 2013–2015

*The amount includes, among others, the donation to remedy the damage caused by the floods in the Balkans in 2014.